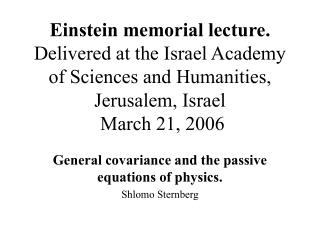 Einstein memorial lecture. Delivered at the Israel Academy of Sciences and Humanities, Jerusalem, Israel March 21, 2006. General covariance and the passive equations of physics. Shlomo Sternberg. By the “passive equations ” of physics I mean those equations Israel 2006 - . after the second lebanese war. this was my twelfth trip to nahariya, israel, my second home. after the

Israel 2006 - . aggression against lebanon. marwaheen massacre 15/07/06 unifl sent off the people of marwaheen to this

Israel March 2013 - . the path taken by berloni is the road traveled by those who every day dedicate their work to help

The Jerusalem Project: Imagine Reconnecting the Children of Israel - The jerusalem project is a global dialogue and

Lesson 1: JERUSALEM, A CITY OF « ISRAEL AND PALESTINE » - History / euro class chapter i: jerusalem in the 20th c.