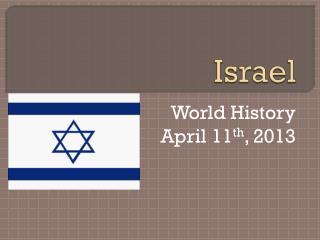 Israel - . what are some historical events that influenced the development of 21 st century israel? what are the major

Israel - A historical tour of. israel. a tour of israel. in our presentation, we have included some history, culture,

Israel - . (fili). what taiwanese know about israel …. the typical response when i say i ’ m from israel: you don ’

Israel - . post wwii. in 1947 the united nations proposed dividing palestine into an arab nation and a jewish nation. in

Israel - . the people of god. genesis 12. leaving the past blessing for nation and nations promise of canaanite land

Israel - Karys kruger mr. sweeney 8c~ humanities where is israel located? israel is a country located on the