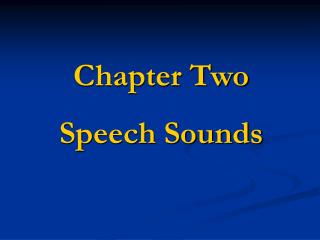 Chapter Two Speech Sounds. As human beings we are capable of making all kinds of sounds, but only some of these sounds have become units in the language system. We can analyze speech sounds from various perspectives and the two major areas of study are phonetics and phonology . .

Speech Production - . physics of the human body. the physics of speech. speech sounds are produced by changes in pressure