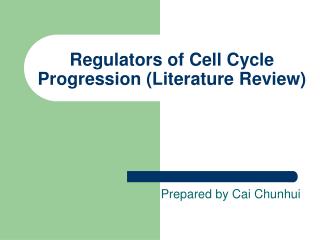 Cell Cycle Review - . what limits cell size? not enough dna moving materials into and out of the cell. what are the parts

Mitotic Cell Cycle Review - . take out a sheet of paper and write down questions 1-20. . 1. what are the stages of the

The Cell Cycle - . test review. 1. which of the following is not a reason cells divide?. cells divide to reproduce

The Cell Cycle - . a review. what is the cell cycle?. the time and activities that take place from one cell division to

Cell Cycle/Protein Synthesis Review - . what are the phases of the cell cycle?. ipmat interphase prophase metaphase

Cell Cycle and Cancer - . study guide review. in which person would cell division occur the fastest? a 10 year old person

Regulating the Cell Cycle - . biology. what do you know about cancer?. us statistics. 1 million new cases each year #2

SNC2D The Cell Cycle - . did you know?. in most eukaryotic cells, mitosis takes about 80 minutes. embryonic cells can

Review of literature - . a literature review involves the systematic identification, location, scrutiny, and summary of