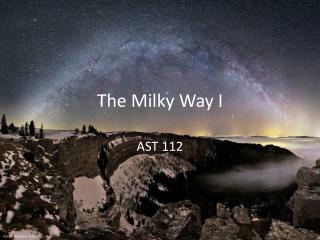 The Milky Way I The Milky Way I. AST 112. Credit: Stephane Vetter. How do we look at this…. … and decide that it looks like this?. The Milky Way. Studying the Milky Way is “like trying to draw a picture of your house without ever leaving your bedroom.” It helps to compare it to other galaxies.

The Milky Way I

Objectives - The milky way galaxy. objectives. determine the size and shape of the milky way, as well as earth’s

Neuron Factoids - . your brain has as many cells as there are stars in the milky way electrical messages in neurons

Chapter 15 - . the milky way: our home in the universe. introduction. w e have already described the stars, which are

Chapter 18 Our Galaxy - . what does our galaxy look like?. our problem. we are inside one of the spiral arms. the milky

The Solar System and its Planets - . the milky way (seen from bryce canyon, ut). the solar system. ?. “a system is a

The Solar System - . the milky way galaxy. our solar system is part of a family of stars called a “galaxy.” our

The average distance from Earth to the sun is - . 1 ly 1 million km 1 million mi. 1 billion km 1 au. a typical galaxy

Galaxies - . chapter twenty-six. guiding questions. how did astronomers first discover other galaxies? how did

Chapter 14 - . our galaxy. all sky view of the milky way. questions. how many stars are in the milky way? about 200

The Milky Way - Dr bryce 29:50 class notices the milky way galaxy appears in our sky as a faint band of light “all sky

THE MILKY WAY - . by: annalise macriyiannis 6m. definition. the milky way: is a galaxy in our solar system and it has