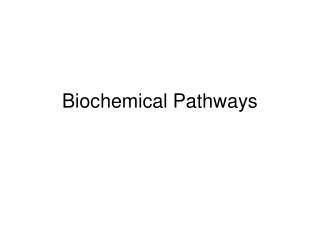 Biochemical Pathways. One Gene, One Polypeptide. In the 1930’s, Beadle and Tatum did a series of experiments that went a long ways towards showing what genes actually do. The catchphrase that comes from their work is: “One gene, one polypeptide”. That is, each gene codes for a polypeptide.

Comparing Photosynthesis and Cellular Respiration -Biochemical Pathways for Energy - . section 8-3. remember that our

Biochemical Compounds - . you are what you eat!. why do we eat?. for energy for nutrients for sport??. 6 types of