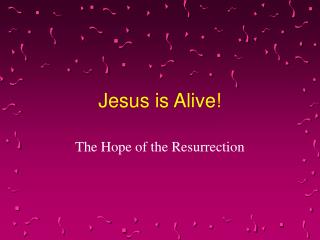 In this text, Jesus turns water to wine! - . “on the third day there was a wedding at cana in galilee, and the mother

The Miracles of Jesus - - newmanlib.ibri.org -. the miracles of jesus. robert c. newman. abstracts of powerpoint talks.

Comparing Jesus and Mohammed - . their methods and teachings were totally contradicting. so who really came from

The Word Is Alive The Book of Hebrews - . chapter two narrated by tony gillon. chapter two. hebrews 1:1–2:18 - jesus is

JESUS- - . son of seven. “seven” found in 379 verses. the great antagonists of jesus, the pharisees, constantly