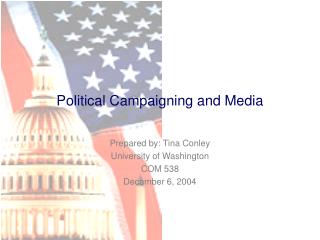 Political parties/voting/campaigning - . thomas jefferson. origins of the 2 party system. constitution says nothing about

The Internet in modern political campaigning - . introduction to the future of politics. candidates face a number of

Political Process and Media - . tssbat: make observations on how the media, individuals, and interest groups monitor and

Campaigning - . definition: to exert oneself continuously, vigorously, or obtrusively to gain an end. campaigning basics.

CAMPAIGNING - . 2 campaign periods: primary campaign and campaigning for the general election. the campaign game. the

CAMPAIGNING - . what to look forward to in the next two terms…. term 1. equal access campaign refugee/action week. trip

The Mass Media and Political Communication - . introduction. the media can be defined as including all aspects of the