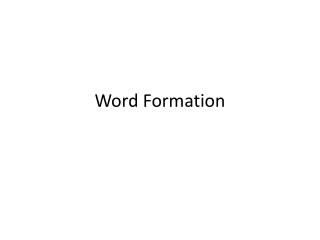 Word Formation. Etymology. The study of word origins. If you look at a dictionary entry, you’ll see the etymology of a word. It might be something historical, cultural, etc. Etymology. How does this help an ESL student?

Word Formation - . roots and stems. root is a simple word without formative element or affix e.g – basa - read stem is

Word Formation - . negative prefixes. as you could see, you can form new words with different meanings by adding a

Word Formation - . ready for fce – unit 8. * what do the words below mean ?. telephone multi-racial poter conduct

Word Formation - . nuha alwadaani. open para 1. p. 52. it is a fact that we can understand and cope with new words

Word formation - . what is it?. we can make nouns , adjectives , adverbs and verbs by adding prefixes and

Word Formation Process - . how new words are being formed in the languagethe process consists of a combination of