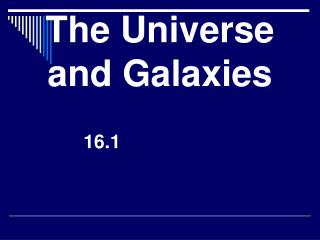 The Universe and Galaxies The Universe and Galaxies. 16.1. most important image. Planet Eating Star!. Universe. The sum of all matter and energy that exists, that has ever existed, and that will ever exist. We will focus on the belief that there is only one universe. Universe Occupants.

The Universe and Galaxies

Unit 10 &amp; 11 Light years, Theories and Characteristics of the Universe - . light year is: . distance that light

Time Line of the Everything - . the focus of this time line is us! these numbers are the best estimate we have based on

PHY 102 – Atoms to Galaxies - . phy 102 – atoms to galaxies. our early human ancestors most certainly looked at the

Evidence for Large Scale Anisotropy in the Universe - . pankaj jain i.i.t. kanpur. introduction. universe is known to be

Active Galaxies and Quasars - . many galaxies have powerful energy sources in their nuclei that, in some cases, produce

Chapter 30 Review - . galaxies and the universe. what characteristic of radio waves makes them useful for determining the

Are we alone? The search for life elsewhere in the universe Summary lecture John Webb - Session 2, 2004. our place in