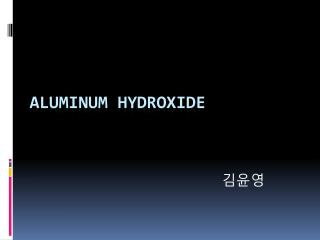 Lithium Hydroxide Market - The global lithium hydroxide market is estimated to develop at a substantial cagr of 12.2% for

Specification of Potassium Hydroxide - Potassium hydroxide (koh) is a colorless solid is a prototypical strong base. it

Aluminum - . done by: jonathan hsieh li-chen. what is aluminum?. it ’ s a metal its atomic number is 13 its accurate

Aluminum - . the element you really need to know all about. presenter: mr. kirby. aluminum: from the periodic table.

Aluminum - . thomas dawson. the discovery. aluminum was used by the ancient greeks and romans, however they never