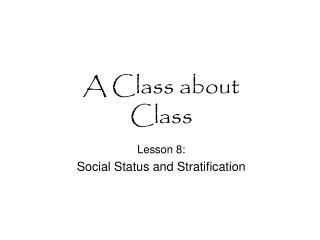 A Class about Class. Lesson 8: Social Status and Stratification. Social Animals. Primates are very social animals Orangutans the on exception Being social would be selected for Why? Humans are highly social animals We make sense of our interactions through social structure. Class Object and class Class - . two fundamental classes of the java api. class object. class object is the root of the

A World-Class Education, A World-Class City - Vice chancellor for academic affairs and provost s cholarship in a ction

Defining a Class - . a class is a template that defines the form of an object. it specifies both the data and the code

add a class - People with similar interests with you. 1. add a class. slide up the bar in order save space on top, and

Class A amplifier: - . an amplifier with a transistor that conducts during the entire 360º of the input signal cycle. .

CLASS A DRUG - . class b drug. class c drug. unclassified (but may be restricted by