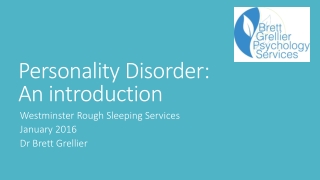 Borderline Personality Disorder - Goals of the training:. how common is the diagnosis of bpd?how can you identify people