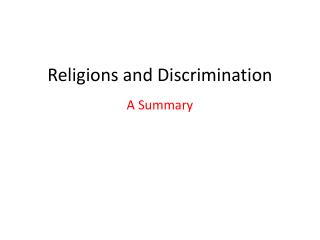 Religions and Discrimination. A Summary. Homework. “Religions help to perpetuate discrimination against women.” What do you think? Explain your opinion. (3 marks). Christianity. Religious Discrimination: considers itself to be the only true religion. RELIGIONS AND VIOLENCE - . the use of violent acts by religions throughout history. kamikaze. kami is the word for

Violence and Religions - . religions are about ethics and morality, peace and order religious persons often violate

Review: New Religions and the Old Religions - . april 8, 2014. review. how is won buddhism different from mainstream

Prejudice and Discrimination - . lesson objectives: a class divided. reflect on the experience of being discriminated

Prejudice and Discrimination - . what’s in a word or symbol?. racism is a negative behaviour based on an incorrect

Equality and Discrimination - . underlying concepts. dignity (right not to be treated as inferior) economical interests

DISCRIMINATION AND PERCEPTION - . partnership. police. pb has partnered with the police to change perception safeguard

Racism and discrimination - . racism: a system of ideas and beliefs. the belief in the superiority of one race over the

Racism and Discrimination - . are you a good citizen?. dead on get on like a house on fire snapper handy with his feet