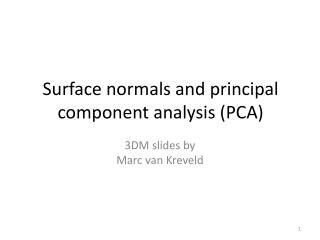 Surface normals and principal component analysis (PCA). 3DM slides by Marc van Kreveld. Normal of a surface. Defined at points on the surface: normal of the tangent plane to the surface at that point Well-defined and unique inside the facets of any polyhedron Principal Component Analysis - . philosophy of pca. introduced by pearson (1901) and hotelling (1933) to describe the