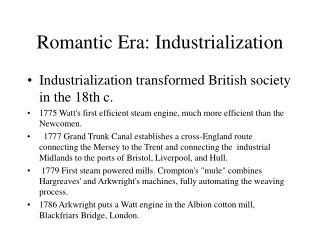 Watch Top romantic places in the world. - Love is often difficult to express. and yet, it always has the power to bind

Music in the Romantic Era - . 1820-1900. the times. general characteristics age of extremes, age of unending lyricism

The Age of Industrialization - 1. the rise of heavy industry 2. railroading 3. invention and technology 4. the “robber