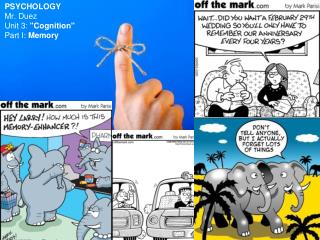 PSYCHOLOGY Mr. Duez Unit 3: "Cognition" Part I: Memory. DO NOW: What is the best thing you ever ate?. Ordering from the menu at Torchy’s Tacos takes a great deal of cognition. Especially if you have never tasted these taco combinations before. Cognition. UNIT 6 , Part 1 The Extraordinary and Fantastic - . click the mouse button or press the space bar to continue. unit 6,

AP Psychology Unit 2: - . the biological bases of behavior (chapters 2 and 4). an early history of biopsychology. plato:

DO NOW - . briefly describe the three parts of the atkinson-shiffrin processing model in your own words!. memory part ii.