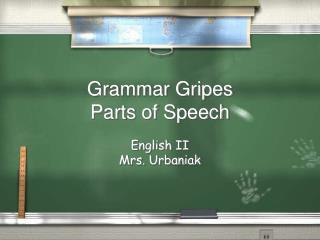 Grammar Gripes Parts of Speech. English II Mrs. Urbaniak. Warm-ups: August 30th. Make a list of the 8 different parts of speech Describe each one You will have 10 minutes to complete this warm-up. The 8 Parts of Speech. Noun Pronoun Verb Adjective Adverbs Preposition Conjunction Speech Production - . physics of the human body. the physics of speech. speech sounds are produced by changes in pressure

8 Parts of Speech - . for your homework last night, you had to write a list of words that matched the indicated part of

A preposition relates the noun or pronoun following it to another word in the sentence. - Prepositions. a preposition