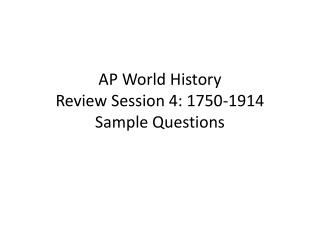 AP World History Review Session 4: 1750-1914 Sample Questions. The factors destabilizing the balance of power in Europe in the late 1800s and early 1900s included all of the following EXCEPT: The strong sense of nationalism held by many European nations. Imperialism - . world history: 1750 - present. imperialism. imperialism: the domination by one country of the political,