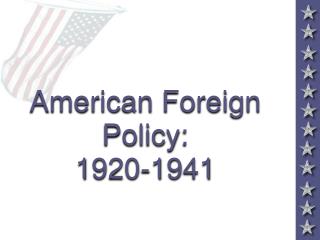 American Foreign Policy: 1920-1941. American Isolationism. Isolationists like Senator Lodge, refused to allow the US to sign the Versailles Treaty. Security treaty with France also rejected by the Senate. July, 1921  Congress passed a resolution declaring WW I officially over!. THE FOREIGN POLICY OF RICHARD NIXON - . “publicly, we say one thing….actually, we do another.” -richard nixon.

America Becomes a Colonial Power - . essential question : why did america join the imperialist club at the end of the