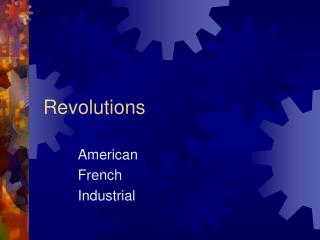 AGE OF NATIONALISM AND REALISM - . continuities and new directions…. revolutions of 1848 had failed across europe

FRENCH REVOLUTION AND THE NAPOLEONIC ERA, 1789-1815 - . naisbitt/freiler. eighteenth-century revolutions. in the second

Highlights of the past year at the IIRE-Amsterdam - . 20 - 31 august  2011 international youth school. twenty six

Unit 3: The Enlightenment and Revolutions - . during this unit, you will:. know the key ideas enlightenment thinkers,

The Second Industrial Revolution - . the first and second industrial revolutions. the first, or old, industrial

17. A 25-cm-diameter circular saw blade spins at 3500 rpm. How fast would you have to push a straight hand saw to have

Thomas Kuhn: A Theory of How Science Progresses and What Theory Is A. The Conventional View of Science and Kuhn’s - Ue

The Protestant Reformation Spreads - . eek! the reformation spreads and some lose their heads!. the time: 1500s the