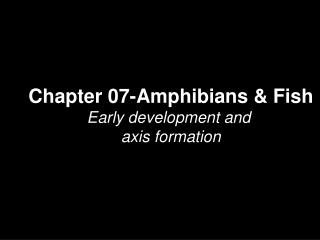 Chapter 07-Amphibians & Fish Early development and axis formation. 7.1 Formation of the parallel arrays of microtubules extend along the vegetal hemisphere along the future dorsal-ventral axis. These microtubules allow the cortical cytoplasm to rotate with respect to the inner cytoplasm. Fish and Herps Amphibians and Reptiles

Intro to - Phylum Chordata (Fish, Amphibians, Reptiles, Birds and Mammals) - . chordates, at some stage in their lives,

Fish and Amphibians - . chapter 30 turboblast edition!. what is a fish??. all fish are: chordates, vertebrates,

Chapter 07 - . learning. learning. a relatively permanent change in behavior due to experience. classical conditioning. a

Chapter 30-3: Amphibians - . by: alice tran and kiara hernandez. what is an amphibian?. “amphibian” literally means

Chapter 17: Amphibians - . chapter 17: amphibians. objectives: define the terms to know from the textbook. compare the 3

Chapter 31: Fishes and Amphibians - . section 1: fishes. what is a fish?. fishes and other vertebrates have at some time