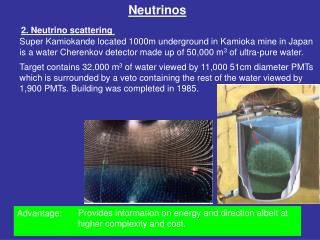 2. Neutrino scattering. Super Kamiokande located 1000m underground in Kamioka mine in Japan is a water Cherenkov detector made up of 50,000 m 3 of ultra-pure water. Growing Neutrinos as a solution of the why now problem of Dark Energy - . connection between dark energy and neutrino

The NO n A Experiment: Phase 2 of the Fermilab NuMI Program - Workshop on physics with atmospheric neutrinos and

Make No Little Plans: A Bright Future for Neutrinos at Accelerators - . kevin mcfarland university of rochester

1998: Discovery that Neutrinos H ave S mall Mass - What is a neutrino?. detection of neutrinos and the super kamiokande