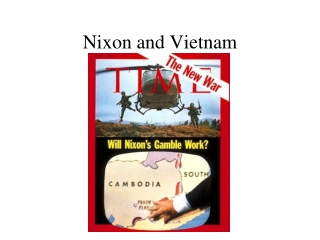 Nixon and Vietnam - . by 1969, president nixon (elected in 1968) faced a national crisis. the vietnam war had turned into

Nixon on Vietnam - . nixon’s 1968 campaign promised an end to the war: peace with honor appealed to the great “silent

Nixon and Watergate - . the election of 1968. richard nixon only narrowly won the 1968 election, but the combined total

Watergate and Nixon - . 1972-1974. important facts. watergate- named after the hotel in which the burglary happened

Nixon and Watergate - . the election of 1968. nixon campaigned as a champion of the &quot; silent majority

Nixon and Watergate - . the election of 1968. richard nixon narrowly won the 1968 election, but the combined total of

Nixon - . i. the man a. very intelligent, paranoid, private, hot tempered b. never accepted by the “elite crowd”. ii.