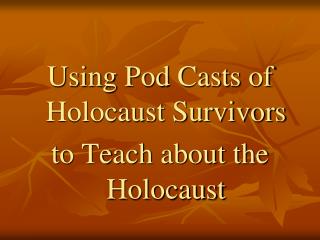 Teachers: A Tribute - . edited by bridget sullivan. teachers: a tribute. to teach is to learn. japanese proverb.

The Book Thief by Markus Zusak and Night by Elie Wiesel - . background information on world war ii and the holocaust. the

What does the Torah refer to? With whom does Judaism begin? What are the four corner stones of Judaism? When does the

Introduction to The Holocaust - . steps to genocide 1933 to

The Nazi Holocaust - . extermination of the jews. standard whii.12b: the student will demonstrate knowledge of the

Holocaust - Diary of Anne Frank Web Quest - . through the use of the resources in this web quest, you have the