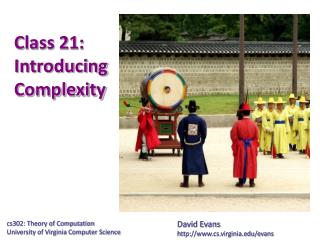 Class 21: Introducing Complexity. David Evans http://www.cs.virginia.edu/evans. cs302: Theory of Computation University of Virginia Computer Science. Exam 2. Good News. 96% of you got 1a (a language is a set of strings) correct Most people got most credit for: 2a (design a TM) Week 12 The Universal Representation: The Computer and Digitalization - . sources: www.iu.edu/~emusic/361/iuonly/slides/

2007 Required Ethics CPE for Virginia Registered CPAs and CMAs/CFMs - . based on virginia board of accountancy outline

FORECASTING AND DEMAND PLANNING - . chapter 11. david a. collier and james r. evans. 11-1 describe the importance of

Talking with Patients after a Medical Error: What to do? What to say? - . julie crosson, md, evans educator