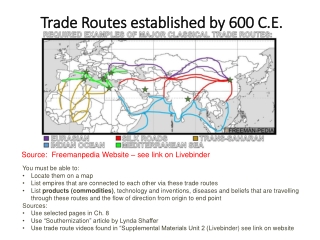 Trade Routes established by 600 C.E. Source: Freemanpedia Website – see link on Livebinder. You must be able to: Locate them on a map List empires that are connected to each other via these trade routes Trade Routes - . major trade patterns in the eastern hemisphere from 1000 to 1500 ad. silk road trading. where did the

Phoenician Trade Routes - . traders of the mediterranean. background on the phoenicians. located on the eastern coast of