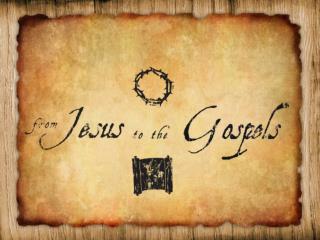 From Jesus to the Gospels. September 16 From the Temple to the Upper Room September 23 The Kerygma of the Early Church: Sermons in Acts September 30 The Kerygma According to Paul: 1 Corinthians 15 October 7 The Teaching of Jesus: Embedded into the Letters Lesson 1 Jesus Visits Mary and Martha Luke 10:38-42 - The point: we can have a friendship with jesus. key verse: “you

Beyond the Gospels - . new testament cont. what is the purpose of the gospels?. to learn about jesus, his life, friends,

Introduction to the Gospels - . bible course unit 7. the gospels are the heart of the scriptures. the four gospels are