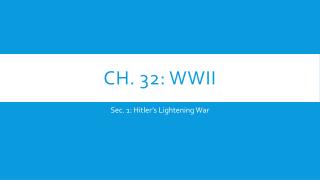 On the Home Front - . minorities in war. home front contributions. what group do you think was excluded from this

WWII - . history 12 ms leslie. technology. items for war had to be produced on a large scale quickly nature of war had

Chapter 11: Between the Wars Fascism, Communism, Dictators &amp; the Road to WWII - . images capturing an era.

WWII in a Nutshell - . part i – was wwii just an extension of wwi?. what document was written right after wwi? the

WWII - . dictators of the world. joseph stalin leader of the soviet union, communist totalitarianism—government that