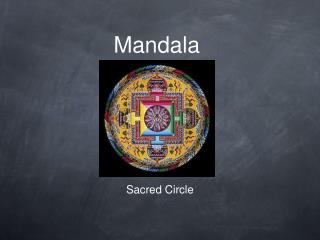 Mandala. Sacred Circle. The mandala is one of humankind's most ancient art forms. With the circle as its basis, it reflects eternity and all of nature: the sun, the moon and even the bird's nest. Types of mandalas may be found in all religions, as well as in psychology. History Mandala - . mandala: self identity in creating a mandala you will: look at the origins of the mandala system. discuss a

MANDALA - . is a spiritual and ritual  symbol  in buddhism , representing the  universe . the basic form of most

mandala - . how to make your sacred space. samples of art works. what is a mandala ?

Mandala - . sanskrit मण्डल circle. a spiritual and ritual symbol in hinduism and buddhism , representing the

Mandala - . a symbolic representation of the universe and the self. photos by laura ellen shulman. tools. laying out the

Personal Mandala - . what is a mandala, you ask?. mandala: any of various geometric designs (usually circular)

The Mandala - . geometry and art. what is a mandala?. it is a symbol from buddhist and hindu culture. it represents the

Character Mandala - . a sanskrit word meaning &quot; circle.”. what is a mandala?. a visual display of symbols and

Mandala Wall Art - How to decorate the wall? bring home the mandala wall art from ashoktreasures.com at affordable price

Radial Design Mandala - . what is a mandala?. the meaning of mandala comes from sanskrit meaning

Exploring the Mandala - . what is a mandala?. mandala is a tibetan word meaning center and circle . it conveys the notion

Mandala Project An Artistic Representation of Hindu Beliefs - . student examples…. directions. side one: you will draw

Mandalas - . geometric link to medicine and history. the word - “mandala”. from hindu sanskrit, classical language of

Mandalas - . mandalas. eq: how do symbols come together to communicate the essence of who you are?. what is a symbol?. an