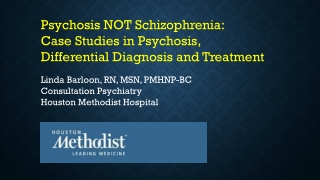 Psychosis NOT Schizophrenia: Case Studies in Psychosis, Differential Diagnosis and Treatment. Linda Barloon, RN, MSN, PMHNP-BC Consultation Psychiatry Houston Methodist Hospital. I have no conflicts of interest to disclose. Your patient has psychosis. Is it Schizophrenia?