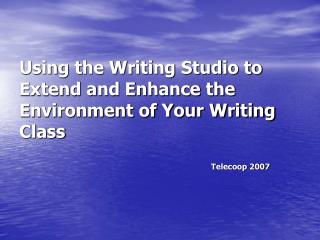 Using the Writing Studio to Extend and Enhance the Environment of Your Writing Class. Telecoop 2007. Who am I?. Jill Salahub, Editor/Programmer for Writing@CSU since 2004 Began my work with the project as a C.S.U. graduate student in 2001 I have used the site as both a teacher and a student.

Step up to Writing - . training workshop jennifer nehl innovative education solutions. step up to writing is about:.

Experience Nonfiction Writing - . cindy matthews. why focus on non-fiction writing?. ‘with the exception of attendance,

Writing Examples - . changes in how the domains are weighted weighting means that the scores in some writing domains