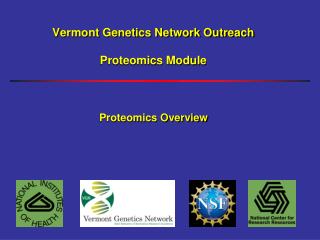 Vermont Oxford Network Data Base - . joyce zwane. introduction. this is a non-profit voluntary collaboration of

Proteomics - . what is proteomics .  is the large-scale study of proteins, particularly

Proteomics - . the proteome is larger than the genome due to alternative splicing and protein modification. as we have