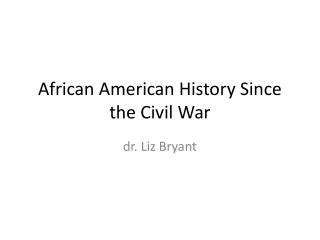 African American History Since the Civil War. dr. Liz Bryant. Women Leaders…. African-American Female Leadership. There were lots of women who took active roles during this era Did not sit around waiting for men to take care of the situation. Turn-Of-The-Century Women. Many were educated

African American Records - . this training will familiarize you with some of the hbll family history library’s

THE HISTORY OF GAY RIGHTS - . by: kaitlin murphy. inspirations . the african-american civil rights movement the counter

The History of African American Theatre - . “escape, or leap for freedom” by william wells brown. the pulpit as