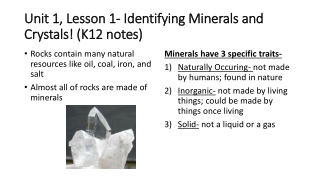 Unit 1, Lesson 1- Identifying Minerals and Crystals! (K12 notes). Rocks contain many natural resources like oil, coal, iron, and salt Almost all of rocks are made of minerals. Minerals have 3 specific traits- Naturally Occuring - not made by humans; found in nature