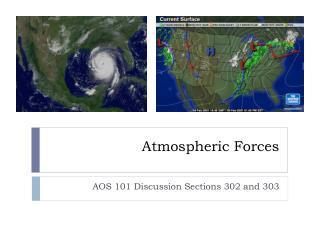 Atmospheric Forces. AOS 101 Discussion Sections 302 and 303. Why Does the Wind Blow?. What makes the wind blow? We need to think about Newton's Laws 1 st Law An object at rest will remain at rest; an object in motion will remain in motion as long as no force is exerted on the object. Superposition of Forces - . r. r. we find the total force by adding the vector sum of the individual

Atmospheric Force Balances - . quiz !. newton’s laws of motion. 1. every object in a state of uniform motion tends to