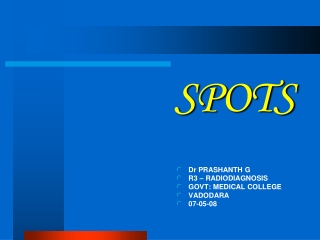 SPOTS. Dr PRASHANTH G R3 – RADIODIAGNOSIS GOVT: MEDICAL COLLEGE VADODARA 07-05-08. 1 . Post-void image from VCUG in a 45 year-old female. Urethral Diverticulum Much more common in females than males, in whom they are rare Most often in women 30-50 years of age