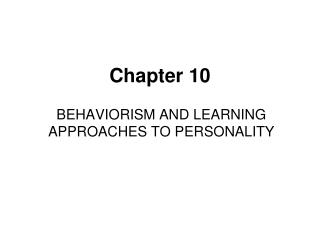 Chapter 10. BEHAVIORISM AND LEARNING APPROACHES TO PERSONALITY. QUESTIONS TO BE ADDRESSED IN THIS CHAPTER. Can principles of learning discovered through animal research provide the basis for a theory of personality? Is our behavior controlled by events (stimuli) in the environment?