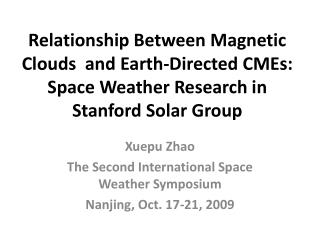 Reko Hynönen 1 1 Aalto-yliopisto Reko.Hynonen@aalto.fi - What drives space weather and what has helicity got to do with

Show Me the Weather - . weather words. clouds can be…. clear-no clouds, it’s just a bright shiny day…. clouds can

WEATHER, CLIMATE, &amp; ATMOSPHERE - . earth’s relationship with the sun. most of the earth’s energy comes from

Report on ‘Extreme Space Weather Events’ workshop that I co-organized in Boulder in June 2014 - . leif svalgaard