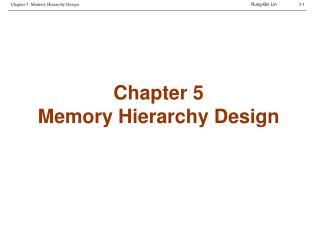 Chapter 5 Memory Hierarchy Design. Introduction. The necessity of memory-hierarchy in a computer system design is enabled by the following two factors: Locality of reference: The nature of program behavior Large gap in speed between CPU and mass storage devices such a DRAM. Memory Hierarchy Design - . motivated by a combination of programmer's desire for unlimited fast memory and economical

Memory Hierarchy and Cache Design - . why is memory important?. memory wall due to emphasis on speed for processor