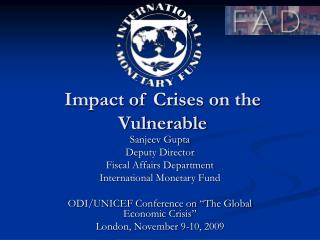 Impact of SCHIP on Vulnerable Children: Findings from - . cindy brach, agency for healthcare research and quality. the

The impact of international financial crises on SMEs: The case of Japan - . 5/24/2010 iichiro uesugi

International Crises and Microfinance: The impact of the financial, energy and food price crises - Inter-american forum

MITIGATING THE IMPACT OF THE SYRIAN REFUGEE CRISIS ON JORDANIAN VULNERABLE HOST COMMUNITIES - . the refugee crisis

Impact of Economic Crises on Health Outcomes &amp; Health Financing - . outline. how deep is the current crisis? how

THE GLOBAL CRISES AND THEIR IMPACT- The Future of Welfare State - . juho saari professor university of kuopio, finland

The impact of the financial crises on trade and investment in ACP countries: A focus on SMEs - . alberto portugal the

The impacts of the international crises on the economies of the LDCs - . giovanni valensisi unctad - division for africa,

The Economic Crises of Today - . cemus 8 october 2013 erik andersson. the crisis 10 min on questions pending after