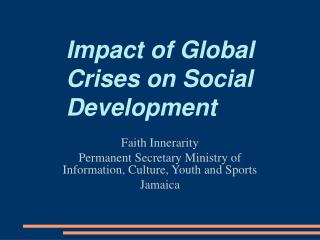 Impact of Social Media on Student - Social media is a powerful platform that helps in getting information. it's a way

Impact of Economic Crises on Health Outcomes &amp; Health Financing - . outline. how deep is the current crisis? how

THE GLOBAL CRISES AND THEIR IMPACT- The Future of Welfare State - . juho saari professor university of kuopio, finland

The Social Impact of Slavery on Africa - . by sam