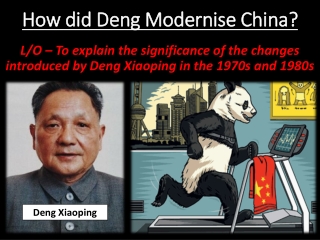 How did Deng Modernise China? How did Deng Modernise China?. L/O – To explain the significance of the changes introduced by Deng Xiaoping in the 1970s and 1980s. Deng Xiaoping. The Four Modernisations = the development of agriculture, industry, national defence and science. The Emergence of Deng.

How did Deng Modernise China?

Geography/China - . major geographic features: 1. surrounded by a variety of natural barriers that has allowed china to

CHINA THREAT ASSESSMENT - . introduction. china. trn eval. aim. to acquaint you with trn obtaining on our northern and

Unit 5: China - . history. for centuries china was a closed country trading only with their neighbors. they distrusted