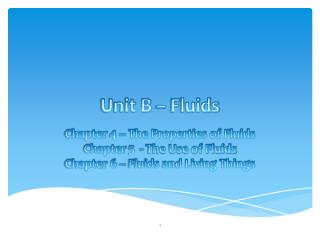 Unit B – Fluids . Chapter 4 – The Properties of Fluids Chapter 5 - The Use of Fluids Chapter 6 – Fluids and Living Things. Key Ideas Fluid Flow is important when an object is moving through a fluid or a fluid around an object Fluids can be describe using their properties Chapter 19 The Cardiovascular System: The Blood - . fluids of the body . cells of the body are serviced by 2 fluids

Metalworking Fluids - . session objectives. you will be able to: recognize signs of unsafe fluid identify metalworking