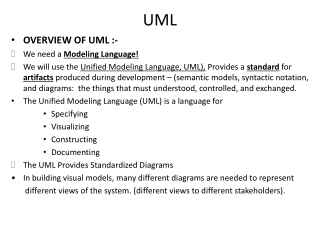 UML. OVERVIEW OF UML :- We need a Modeling Language! We will use the Unified Modeling Language, UML), Provides a standard for artifacts produced during development – (semantic models, syntactic notation, and diagrams: the things that must understood, controlled, and exchanged. UML - A brief introduction. uml. acknowledgements. the material in this tutorial is based in part on: concurrency: state

UML - . unified modeling language. model. the heart of object-oriented problem solving is the construction of a model.