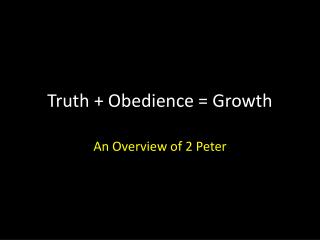 Factors that Influence Obedience to Authority - . milgram (1965) followed up the famous study on obedience to authority (

The Global Economy Sources of Growth - . roadmap. in the news reminders gdp per capita, gdp per worker, and data on both

Obedience to Man By Dave Batty - . obedience to man 5 th edition by dave batty. this powerpoint is designed to be used

Annual Growth, Catch Up Growth - It matters little what else they learn in elementary school if they do not learn to read

The Truth About Christmas - . hotep-ndugu inc. wamwara@gmail.com. objectives. to discuss the origins of the christmas

Social influence Conformity, obedience - . a large part of psychology is devoted to the study of the various ways that

The Truth About Drugs - . pre-program student questionnaire. what is a drug? are drugs dangerous? yes or no if you