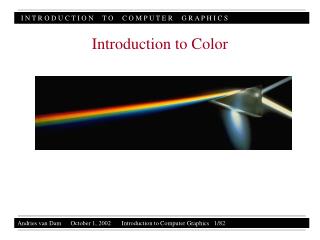 Color In Design/ Intro to color Psychology - . color preferences: colors individuals gravitate towards. based on

Intro to Color Theory - . color is possible because of the energy of the sun filters through the earth’s atmosphere.

How to color McTaggart - Benj hellie university of toronto consciousness @ the beach ii 25 february 2007. how to color