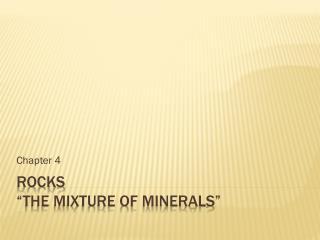 Chapter 4 . ROCKS “The Mixture of Minerals”. Rock – a naturally occurring solid mixture of crystals of one or more minerals. Rock Cycle – the continual process by which new rock forms from old rock material. Rocks are always changing. The Rock Cycle. Minerals and Mining - . chapter 14. minerals &amp; the environment. uses of minerals. what is a mineral?. naturally

Major Minerals - . chapter 11. major minerals. a major mineral is required in the diet and present in the body in large

The rock cycle - . weathering physical and chemical physical weathering- changes in the degree of consolidation with

ROCKS AND MINERALS - . unit one. warm-up #1. a mineral is inorganic, which means that it contains. answer. no materials