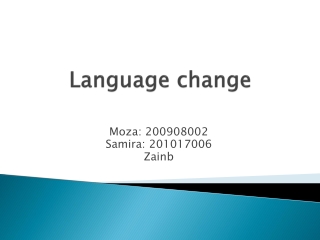 LANGUAGE CHANGE - . can linguistic change be observed while it is actually occurring ? traditional linguistics vs modern

Language change - . all spoken languages change some change faster than others. continued. written languages can be fixed

Language Change - . in the observed world, it is a constant fact that change is continual and inevitable. in human

Language Change - . reminder: midterm 1 is next week!. review sheet powerpoint slides – print them out or get copies in

Language History and Change - . sir william jones, a british judge in india in 1786, observed that sanskrit was more