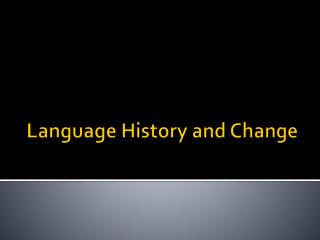 Language History and Change. Sir William Jones, a British Judge in India in 1786, observed that Sanskrit was more perfect than the Greek, and more copious than the Latin, and more exquisitely refined than either LANGUAGE CHANGE - . can linguistic change be observed while it is actually occurring ? traditional linguistics vs modern

Language change - . all spoken languages change some change faster than others. continued. written languages can be fixed

Language Change - . in the observed world, it is a constant fact that change is continual and inevitable. in human